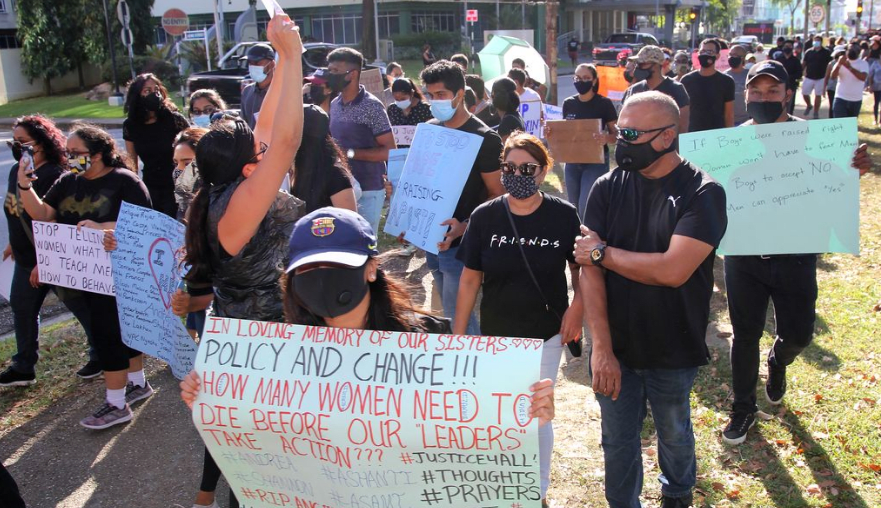 As the nation mourns yet another loss of one of its daughters under violent circumstances, we post our frustrations and relate our own stories about our own experiences. But at what point do we realize that we are stuck in a seemingly endless loop?

Soon enough the news reports that the person was last seen either in the company of someone known to them or entering a private taxi which would be the last time someone saw them alive. The nation is shocked and outraged, leaders point fingers as to who's responsible for the state of affairs, while the family continues to weep on mourn.

Two weeks later we are all back to business as usual.

We have tidbits of information coming and news media as to what took place, but as time rolls on, we hear less and less about any investigations or even a map of the truth surrounding the events around the crime. Eventually, we may see the person's charged with the crime but more often than not it takes a long time (usually years) before they're actually convicted.

There is a sense of uncertainty and fear that envelopes the nation, but as time rolls on and public interest fades,it seems that the authorities have other priorities - until the next gruesome murder takes place.
The cycle of chaos and hopelessness repeats itself.


For those who have experienced loss in such a sudden and terrible manner, we are reminded of that endless yearn for closure.

2008 is a year that will forever be etched in my memory. I was in the kitchen of our home, rushing to catch the bus to get to school, when the 7am news began.
"38 year old Nicoline Churaman of Maturita was found dead..."
I thought I heard wrong, but I knew that I didnt.
I yelled out to my mother that the radio said Aunty Nicoline was dead.
"You are lying!"
I kept saying it and she picked up the phone frantically to make a call. I dont know who she was trying to call, probably my uncle (her husband) or even my aunt hoping it wasnt true.

I saw my dear aunty Nicoline very often. My family and I would visit every week or two because she, my uncle and cousin lived in close proximity to my grandpa. I remember her as a young, beautiful east Indian woman who loved to wear fitted spagetti strapped tops and short pants with brown highlighted wavy curls and smooth skin. She had a distictive laugh and shy smile that I hear and see every time I think of her.

She was the type of woman that made things happen.
Let me explain.
There was a time when my aunty and uncle didnt seem to have much and they lived very humbly in a small room, then a wooden structure. Soon they moved to better living with my aunt opening a parlor in-front of their now concrete home. Internally I was so happy and proud of her because it was something she always wanted and she along with my uncle made it happen.
Life was good. Life was great.

On the morning of June 4th my uncle dropped off Nicoline Churaman to work as he always did at a location in Aripo. She was a Fire Guardian with the Forestry Division and she would usually walk a short distance to meet up with the rest of the work crew.

She never made it to the crew.

She was found with her face bashed in with a boulder, murdered, raped with her cellphone ringing continuously in her backpack.


In the days before her funeral there was a whirlwind of suspicion, misinformation and lies that would later cause a bit of a rift among the family.

As someone who has lost a parent, I could fathom how her only daughter (my cousin) felt during all of this chaos, especially losing her mother in such a gruesome manner.

She was just a child, lost, heart broken and completely devastated. She shared with me that she over heard officers making a joke out of the fact that they couldn't find the killer, saying that Tarzan did it because she was found in the 'bush'.

This is the kind of humiliation, mental torture and abuse families have to deal with in the aftermath of these murders. The police, who are to 'protect and serve' have no sort of empathy and emotional training in preparation for these events. When the family asks for updates on investigatons, they are told they are 'bothering the officers', or "doh study that, we doin we wok".

When Pixie Lakhan's mother went to the police to report her daughter missing, officers said she ran away and that she had gone "Tobago with a man for the Easter weekend". Pixie was found dead a month later in a bamboo grove close to her home.


Why closure is essential

As human beings we yearn closure. Its that feeling you get when your favorite TV show ends on a cliff hanger on the season finale.
Its that feeling but gut wrenching, and stays with you forever.

In a paper written by Marilyn P Armour Ph.D and Mark S. Umbriet Ph.D, they found that survivor reactions to violent crime are often protracted and difficult to treat. Studies of family members of homicide victims found that they could not find meaning after five years.

Survivors also endured post-homicide distress that did not dramatically lessen over time and more than likely to develop PTSD (post-traumatic stress disorder). If the family is not financially well off, the may not be able to afford a psychologist to get the mental support they need.

Some family members become exceedingly withdrawn from society, even suffering mental breakdowns and in some unfortunate circumstances, suicide.

While reading through this paper, I came across this header, which reads so true to the situation we have in Trinidad and Tobago.
The following is an excerpt:

In Trinidad and Tobago, the usual case is that the killer could not be found, the police arrested someone but they had to let them go because they had no evidence or they allegedly killed the evidence. It usually takes many years even decades for the case to be called, and a trial to start. By that time all or most evidence is lost, witnesses don't want to come forward anymore, they cant be located, they died, and basically all credibility is lost to build a case.
Insanely enough, the police are the criminals, orchestrating and manipulating the system unscathed.

Some criminals just end up walking free.
Free to do the same crimes over and over again.
The family gets no justice, no closure.


It may never end

Sadly, our politicians, no matter the government, are a bunch of over-paid, reactive idiots, that plow this country for their own personal benefit. Nothing but talk, nothing but lies, nothing but false promises to shut the people up when they make a scene.
Years go by and there is no reform to our legal and justice system, no sex offenders registry, no sense of safety for the country's citizens especially our women.

The country suffers from a chronic case of lazy that is nothing short of Guinness World Record worthy.

So while most of you genuinely protest or prefer to virtue signal on social media, remember the real impact these cases have on the victims families.

Until the day comes when we as a nation really mean enough is enough, scroll to the top of the article and read again.

The Ultimate Penal Sanction and "Closure" For Survivors Of Homicide Victims

Photo: Anisto Alves
The Trinidad Guardian Newspaper
We are not going to stop