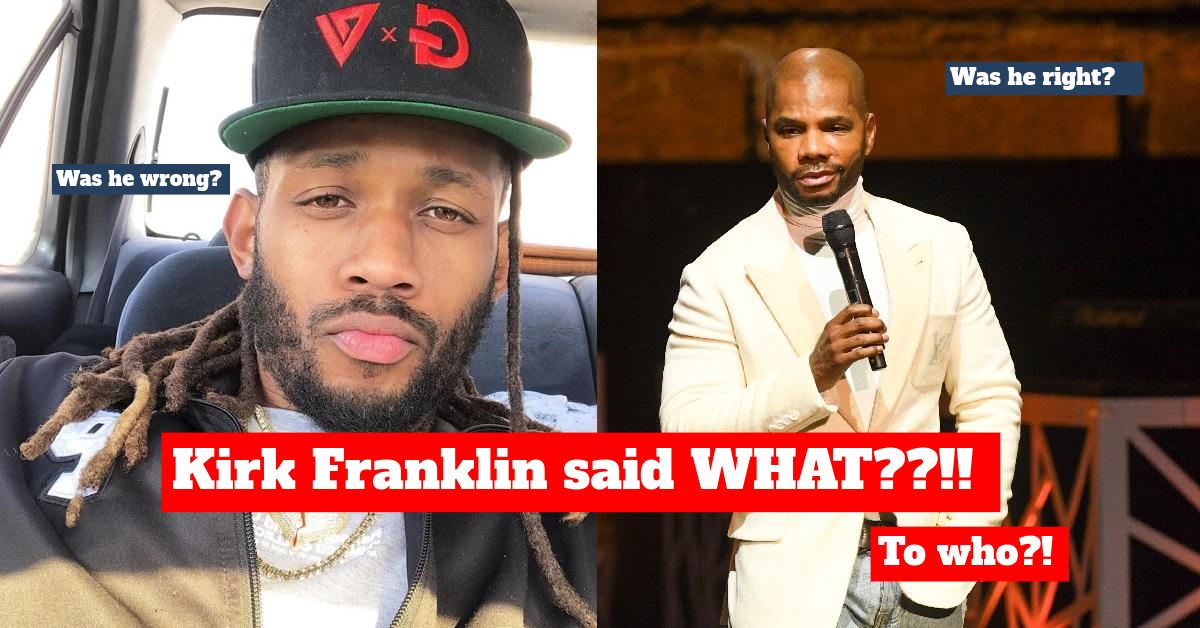 I believe there is a difference between judgment, accountability and cancelation.

Disclaimer: I don't know the relationship Kirk Franklin and Kerrion Franklin. I can only speculate. There are always three sides to a story: both parties' sides and the truth.

Some extremist liberals will want his head on a platter.

I honestly don't want any of that. I want him to be held accountable. If he acknowledges his actions as wrong let him be given the grace and the space to move on and atone for his actions. He has issued an apology but his son and others have questioned the sincerity of it.

Kirk claims that there were involved in family counseling when the altercation happened. In my opinion the son needs to continue counseling (separately) and it is up to him to decide what relationship, if any, he wants with his father. He has stated that he did not want anyone to disrespect his father. He was just frustrated by what he has been enduring over the years.

Let us discuss the big elephant in the room and that is the normalization of aggression as a form of discipline in the black community.

While some people are seeing how unhealthy this is and are trying to break the cycle, it comes as no surprise to me, that some black people are taking to Twitter and other social media platforms describing this as normal and like Kirk Franklin said in his apology it is “family business.” This has been a talking point for years in the form of memes, skits, on television, social media etc. White parents are always depicted as passive yet nurturing, love and supportive while black parents are depicted as aggressive, rude, gaslighting and pretty much never even taking accountability for their actions. It is believed that this behaviour will prevent us from being ‘spoiled”, “rude” and “soft” that apparently our white counterparts are.

If you have not figured out by now, let me make it abundantly clear that I do not agree with this behaviour. Many black people are raised to see their parents not as “guides” but almost like deities. Respect is seen as blind obedience and differing viewpoints are seen as “rude”. This behaviour can lead to avoidance attachment styles. In babies and children, they become aware that they have been rejected and thus stop illustrating emotions. The idea that this will help us toughen up is also flawed as children mimic what they see and has only made some, prone to aggression and having limited conflict resolution skills if any.

Research done by the American Psychological Association depicts a different picture than what we are used to hearing:

A 2015 Pew Research survey found that black parents are more than twice as likely as white and Latino parents to use corporal punishment on a regular basis, and they are far less likely to never spank their children. But while hitting children is prevalent in black communities, contrary to popular belief, it is not an intrinsic cultural tradition. Black parents have legitimate fears about the safety of their children, and the overwhelming majority believe physical discipline is necessary to keep black children out of the streets, out of prison or out of police officers’ sight. And far too many parents argue that “whupping” children is a distinctly black tradition. This belief, however heartfelt, is wrong.

You teach your child/children that they disagreeing is disrespect, your ( as well as older relatives, family friends) disrespect is discipline, then how do you expect them to be autonomous beings with agency when they go out into the world? Why are you surprised when people treat them the way you taught them to be treated? You made them into push overs or weak, easy target for bullies but then you expect them to toughen up when society treats them as you did. Their self esteem is low because their thoughts, feelings and ideas have never been appreciated or valued.

Last point to note is the argument that it is “family business”. Many of us have heard about Princess Harry and Meghan Markle’s interview with Oprah Winfrey last week Monday. One argument that has been mentioned by some members of the British press that it should have been a private matter. Now I am not advocating for people to start airing out private matters for John public but it is interesting to me that in situations like this instead of addressing the problem at hand and defending themselves, some people tend to be more concerned with their public perception than fixing the issue.

Again, none of us know the truth but the parties involved. I pray and hope each one of them can have peace.

Perceived Instrumentality and Normativeness of Corporal Punishment Use among Black Mothers